‘Matilda’ magic to come alive in Colombo with Cinnamon Life 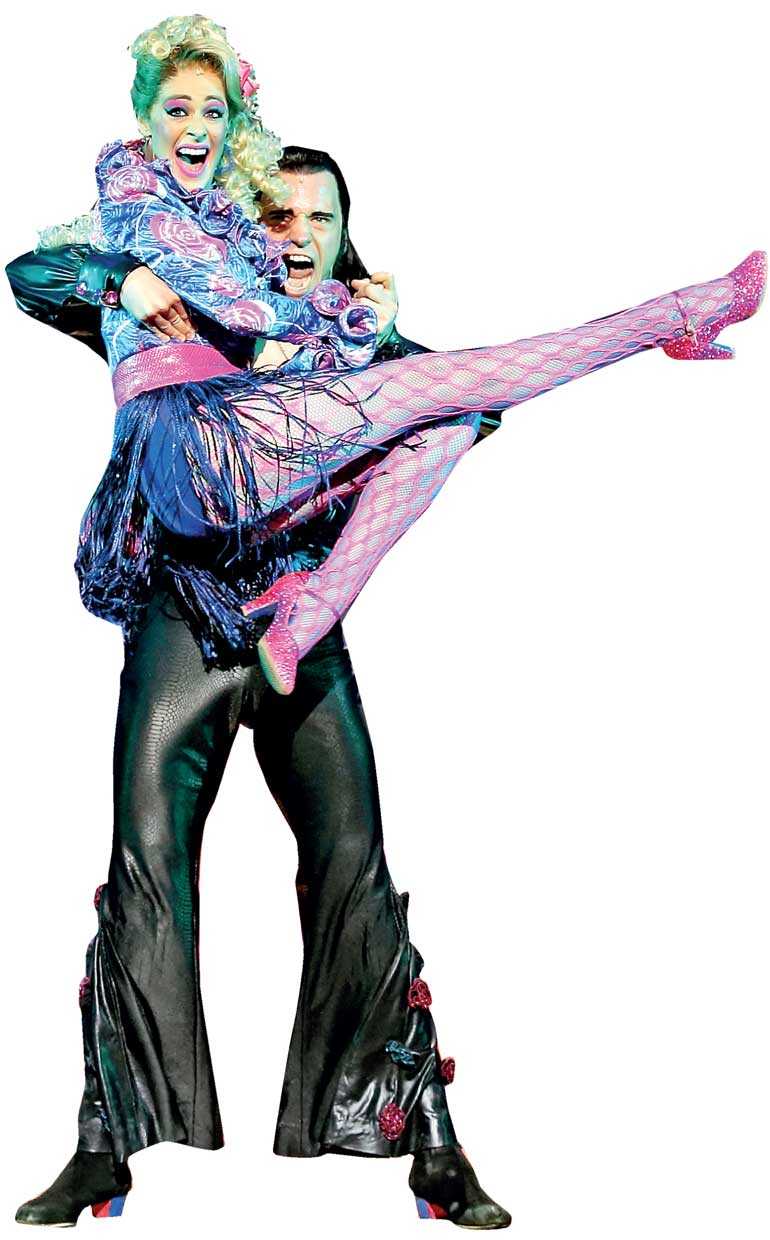 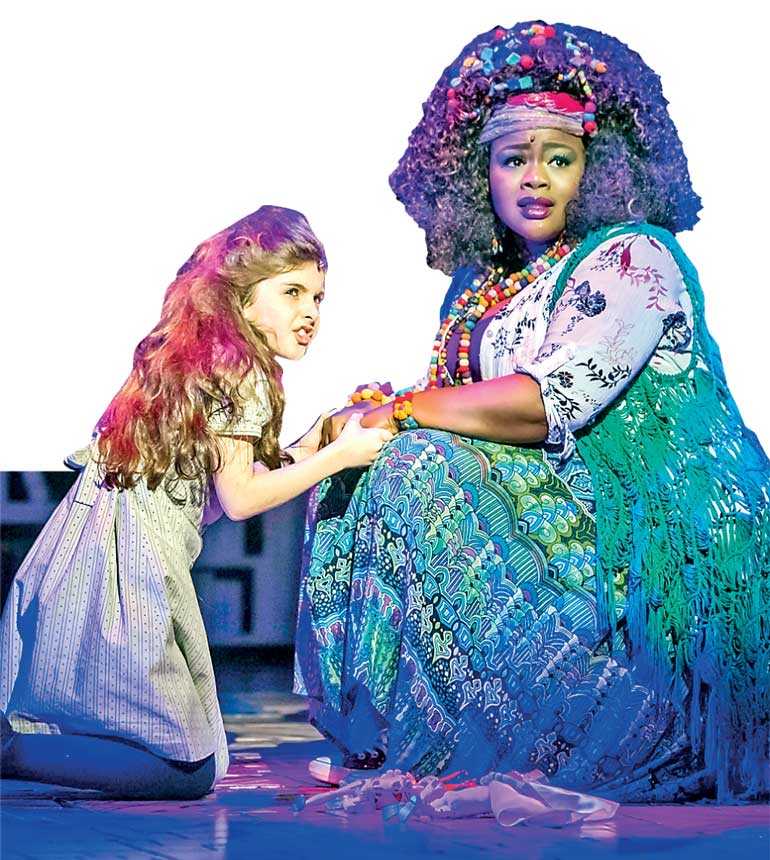 ‘Magic’ is a word that echoes in every conversation about ‘Matilda the Musical’ and that’s the magic Cinnamon Life is bringing to Sri Lanka in June. 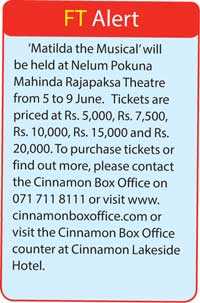 One of the West End’s best-selling productions, ‘Matilda’ is being presented in Colombo by Cinnamon Life with GWB Entertainment and the Royal Shakespeare Company, promising five nights of wonderful theatre, music, storytelling and magic that will enthral children and adults alike, who will find themselves watching open-mouthed in wonder as the story unfolds on stage.

The heart-warming, whimsical production is utterly enjoyable and exhilarating and it is no surprise that ‘Matilda the Musical’ has won many awards and taken audiences by storm around the world as one of the most successful British musicals of modern times.

The shows in Colombo will be presented from 5 to 9 June at the Nelum Pokuna Mahinda Rajapaksa Theatre.

Based on the deeply-loved book by world-renowned author Roald Dahl, the story revolves around Matilda, an extraordinary little girl with plenty of spunk and a very vivid imagination, who manages to change her destiny in the face of challenges.

Hampered and harassed by her TV-obsessed parents and hounded by her formidable school mistress Miss Trunchbull for being too smart, the little girl who loves to read overcomes the odds and reclaims her life, sharing some great messages along the way.

Good overcoming evil is the key message of this much-loved story, laced with courage, friendship, hope and magic.

‘Matilda the Musical’ will fascinate and inspire families, keeping everyone entertained to the very last minute with its gripping storyline, endearing characters and entertaining tunes.

Children and adults who love Roald Dahl and ‘Matilda’ will be over the moon to see Matilda come to life and readers will have absolutely no regrets – this is certainly not a case of ‘the book was better,’ as some great additions and twists make the musical extra magical.  But one of the best things about the production – and this cannot be emphasised enough – is that one needn’t have read the book or watched the movie to enjoy the musical.

The production perfectly showcases Roald Dahl’s inspiring story, intertwining the creativity of composer and lyricist Tim Minchin, great writing by Dennis Kelly and exceptional sets by Rob Howell. The music and meticulously-crafted lyrics play a key role in bringing the production to life.

It is clear that every single aspect of this production has been carefully thought out to ensure an excellent show in every aspect, with the story, costumes, lighting, choreography and music all working together perfectly. It’s no wonder then that it has won so many awards and was crowned as the #1 show of the year by TIME magazine in 2013.

The cast comprises incredibly talented adults and children and the musical is fast-paced, which will keep smaller children engaged throughout, while the attention of older kids and adults will surely not be diverted even for a second.

A kaleidoscope of colours, the stunning floor-to-ceiling set uses tiles, blocks and letters throughout that speak to children about books and learning. Every element has been carefully considered over a long period of time with the Royal Shakespeare Company to get everything absolutely right.

It takes 12 massive 40-foot containers to transport the spellbinding set across the world and includes every single aspect – from the floor to the wigs and the swings. 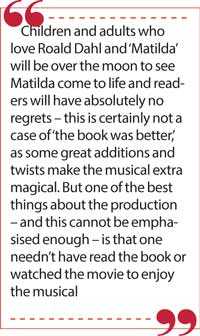 It goes without saying that putting this show on is a very complex operation – the wardrobe changes required and several hundreds of lighting cues alone are extensive – calling for perfectly-timed execution in true military style.

Matilda may be the star of the show but my favourite of them all was the much-reviled and terrifying Miss Trunchbull. Played by a man (Ryan de Villers) and perfectly portrayed, the sassy Miss Trunchbull is sure to win hearts and have audiences in fits of laughter in Colombo!

The female girl heroine Matilda will of course be deeply-loved by the audience, who will find a lot of encouragement and inspiration in her story.

As for some of the other memorable characters, Miss Honey is utterly endearing, Matilda’s mother perfectly plays a real-life Barbie and little Lavender is adorable, while librarian Mrs. Phelps takes the story to another level.

The cake-eating episode is nothing short of fantastic and children will be thrilled with the utterly gross, super-realistic burping scene – so real you will swear you can smell the long-drawn-out burp yourself!

The songs are brilliant, with personal favourites being ‘The Smell of Rebellion’ (utterly witty and hilarious!) and ‘Quiet’ – it’s no surprise that audiences maintain pin-drop silence when this song is being performed.

The scene where Miss Trunchbull grabs a little girl by the pigtails to hurl her away will certainly grab the attention of the audience, while the chalk writing on the board is perhaps the most magical of them all.

The scene where the kids leap on the swings and soar is certain to be loved by all – it is an experience that just about every person in the audience will be able to identify with, having had the experience of flying through the air on a swing at least once in their lives.

Into the last hour I was worried that the story about Magnus would not be included but those fears were soon allayed. The story telling scenes in the library are engrossing too.

You will walk out enveloped in amazement at the end, thrilled with the magic of having seen Roald Dahl’s characters come to life just as you imagined them. As for me, I was utterly overcome with awe – what a show!

Not to be missed

Offering close upon three hours of excellent entertainment that will stay in the memory for years to come, this show is certainly not to be missed and Cinnamon Life deserves a mighty round of applause for bringing such a high-end production to Sri Lanka, during its very first tour of Asia no less.

(The multiple award-winning ‘Matilda the Musical’ commenced its first tour of Asia in March this year, with Singapore as the first stop. Daily FT was among the media invited by Cinnamon Life to experience the show at Marina Bay Sands in the run-up to its appearance in Colombo.)