The excellent golf continued in to the final round of the LECTRA Sri Lanka Golf April Grand-Prix and after a tense tussle between the leading ‘duo’ B.A. Sanjeewa fired another 7 under Par 63 for a 4 round total 22 under par, just 1 stroke ahead of Amarapadma who had to settle for the Runner-up place, despite another splendid 5 under par 65 for a 4 round 21 under par total.

Sisira Kumara not to be outdone also fired a Gross 65, playing in the leading ‘flight’, but had to be content with 3rd place on 13 under-par, aggregate for the Tournament. 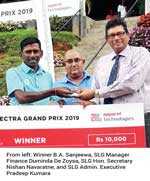 Vinoth Kumar from NEGC and J.K. Januka Dilshan, Captain of the Sri Lanka Junior National team 2017, tied in 8th place on 281, 1 over Par for the 4 Rounds. M.H. Chalitha Pushpika secured the 10th spot, relegating the reigning Sri Lanka Amateur Golf Champion M.U. Chanaka Perera, from whom better was expected. The other youngster who shone at the Sri Lanka Amateur Championship U.A. Ranasinghe also disappointed ending in 16th position, unable to adopt to the conditions.

Junior Champ Dhuwarshan from Nuwara Eliya Golf Club finished in 14th place , whilst Haroon Aslam the great Junior prospect from Victoria Golf and Country Resort had a disastrous closing round of 85 to slip down several places to 17th out of the 21 players who made the ‘Cut-off’. 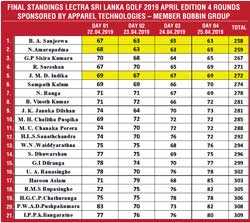 Notwithstanding, 3 golfers played each of the 4 rounds under par and a special encouragement award has being implemented by the Sri Lanka Golf Union initiated by the Treasurer Sri Lanka Golf Sudath Kumara. B.A. Sanjeewa, N. Amarapadma and J.M.D. Indika received the special prizes from Capt. Tissa Kumara representative of the Army Diyatalawa Golf Club.