Sudan's transitional military council has arrested members of the former government and promised not to disperse protesters.

A spokesman also urged the opposition to pick the next prime minister and vowed to implement their choice.

Months of protests in Sudan led to the ouster and arrest of long-time leader Omar al-Bashir on Thursday.

Demonstrators have vowed to stay on the streets until there is an immediate move to civilian rule.

A sit-in is continuing outside the defence ministry in the capital Khartoum.

What did the military council say?

"We won't appoint a PM. They'll choose one," he said, referring to opposition and protest groups.

He also said the army would not remove protesters from their sit-in by force, but called on protesters "to let normal life resume" and stop unauthorised roadblocks.

"Taking up arms will not be tolerated," he added.

The military council also announced a raft of decisions, including:

After months of protests, long-serving leader Omar al-Bashir was ousted and detained by the military 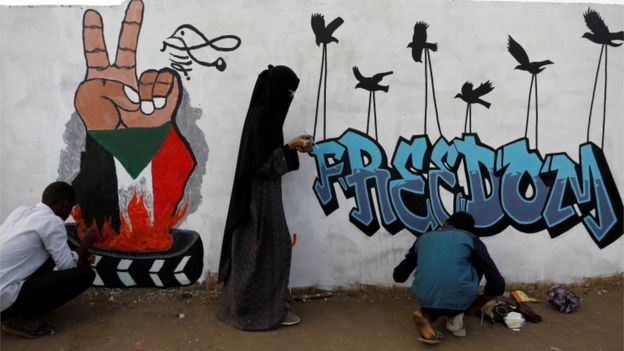 What's been happening in Sudan?

Protests against a rise in the cost of living began in December but soon developed into a wider call for the removal of Mr Bashir and his government.

On Thursday the military removed and detained the veteran leader after nearly 30 years in power.

But demonstrators vowed to stay in the streets regardless, demanding an immediate switch to civilian government.

Mr Ibn Auf himself stood down the next day, as did the feared security chief Gen Salah Gosh.

Lt Gen Abdel Fattah Abdelrahman Burhan was then named as head of the transitional military council, to become Sudan's third leader in as many days. 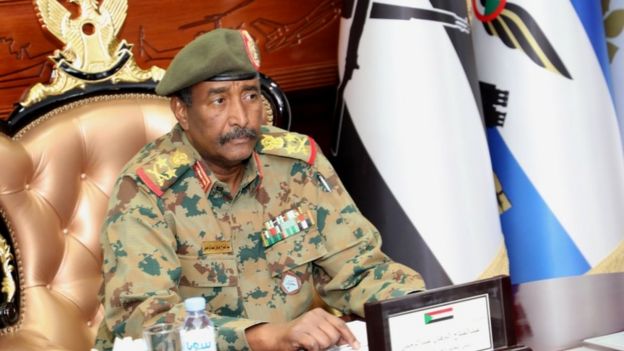 In a televised address on Saturday, Gen Burhan vowed to "uproot the regime", pledging to respect human rights, end a night curfew, release political prisoners immediately, dissolve all provincial governments, try those who had killed demonstrators and tackle corruption.

But the Sudan Professionals Association (SPA), which has been spearheading the demonstrations, said the council's response "did not achieve any of the demands of the people" and urged protests to continue.

Among its demands are the restructuring of state security, the arrest of "corrupt leaders" and the dissolution of militias that operated under former President Bashir.

The whereabouts of Sudan's former leader is currently unknown, but the coup leaders said he was in a secure place.

Mr Bashir has been indicted on charges of war crimes and crimes against humanity in Darfur by the International Criminal Court.

But the military council has said it will not extradite him, although he could well be put on trial in Sudan.

Maj-Gen Shanto said that the former ruling party would have no part in the civilian transitional government but could field candidates in the next elections.