Pic caption Sri Lankan soldiers secure St. Anthony Shrine after an attack in Colombo on Sunday. At least 290 people were killed and over 450 injured in eight blasts across the country. © AP

COLOMBO -- As Sri Lanka comes to grips with its worst carnage in a decade, with a terrorist bombing spree on Sunday killing nearly 300 people and leaving more than 450 injured, early evidence points to a new security threat for the strategically located South Asian island still recovering from decades of bloody conflict.

Insiders in the country’s security establishment say that the terrorist attacks on Easter Sunday, targeting three prominent churches and three high-end hotels in Colombo and beyond the capital, marks a departure in scale and organization from attacks during the nearly 30-year civil war, involving the Tamil Tiger separatists, and two Marxist uprisings.

The planning, selection of targets, coordination and deep penetration in the country “point to a new threat we have not witnessed till now,” one security source told the Nikkei Asian Review.

On Monday morning, police said the death toll was 290, and that 24 suspects had been arrested. An islandwide overnight curfew from 6 p.m. to 6 a.m. has been lifted.

“This is not the work of an ordinary group, nor can it be pulled off by criminal gangs,” said Jayanath Colombage, a former Sri Lankan Navy commander who had handled Colombo’s security for a period during the civil war. “There was lot of expertise to assemble the bombs, transport them to the targets and select the time of the attacks.”

A woman cries after the bomb blast 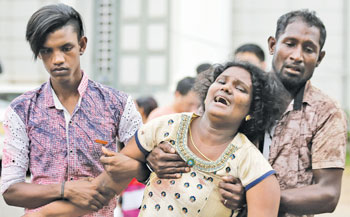 International terrorism experts familiar with attacks on soft targets in Asia agreed. “These attacks were pure terrorism intended to cause maximum carnage,” said Phill Hynes, the lead terrorism expert at ISS Risk, a Hong Kong-based security consultancy. “There had to be a significant degree of local support to mount an attack of this scale, probably 80 to 100 handling a range of operational tasks.”

“But what is the motive?” Hynes said. “This could have taken at least three months of planning and financing, so it is unlikely it was simple reaction to any recent events.”

Inthe search for answers, investigators are turning their attention to a local group of Muslim extremists that police and intelligence sources suspect were involved in the attacks that had suicide bombers. One of the suicide attackers reportedly has been identified as an affluent businessman in Colombo.

Those details are among the leads police are chasing, including where a bomb exploded on Sunday at a housing complex in Colombo after a team of police investigators arrived. Three policemen died in that raid.

Yet that early breakthrough does not minimize what is now stark: a major failure by Sri Lanka’s security establishment to prevent the carnage. Consensus on that front is emerging from among Colombo’s diplomatic community and seasoned political observers after reports of a warning by the country’s police chief sent to the intelligence community on April 11 that suicide bombers were planning to target “prominent churches.”

Prime Minister Ranil Wickremesinghe affirmed on Monday that there was a security failure, given that information about the attacks had been available in advance. “We must look into why adequate precautions were not taken. Neither I nor the ministers were kept informed.”

But some residents in Colombo say there had been rumours since early April about an impending attack in the country. “Through this month there were rumours that something was going to happen; people were talking about it,” said Sherine Xavier, director of The Social Architect, an independent human rights watchdog. “There were many theories that also emerged at the time if it was an effort to destabilize the government.”

The failure of the state’s intelligence operatives to act is also attributed to the timing of the warnings revealed by Pujith Jayasundara, the country’s police chief. The warnings came on the eve of major holidays in Sri Lanka -- the Sinhala and Tamil New Years -- to mark the end of the harvest season.

“The warnings came just when everyone was getting ready for the holidays from April 12 to 15, so the mood would have been on the break,” a political insider said.

But the roots of the security failure could also run deeper. The ruling coalition government, which came to power following the January 2015 presidential election, remains unstable and its two major factions are at loggerheads over running the government.

President Maithripala Sirisena, who heads the administration, has repeatedly tried to oust Wickremesinghe, including through a failed constitutional coup late last year. “This is a two-party government with two heads pulling in different directions,” one diplomatic source said.

Analysts say the political instability at the top of the country’s leadership has infected decision-making within the bureaucracy, including the security establishment. The country’s intelligence community also remains more partial towards former President Mahinda Rajapaksa, who had ruled the country in an autocratic manner for nearly a decade until his surprise defeat to Sirisena in 2015.

Rajapaksa remains deeply popular among the country’s majority Sinhalese community for his strongman swagger and for presiding over the government that militarily defeated the Tamil Tigers, the masterminds of the suicide bombers during the civil war, in May 2009. The death toll in the ethnic conflict exceeded 100,000 victims.

Two Marxist uprisings, the first in the early 1970s and the second in the mid-1980s, were just as brutal, with disgruntled Sinhalese youth who wanted to overthrow the state. Tens of thousands were killed during both insurrections.

The country’s Muslims are the second largest religious minority, accounting for nearly 10 per cent of the population, and had not been directly involved in the bloodshed across the country during the civil war and uprisings. But in recent years, some Muslim communities have been targeted by mobs from the Sinhalese majority, just as some Christian congregations have.

“These attacks were on soft targets and not aimed at the state, so there may be a backlash,” said a former Sri Lankan diplomat